It was my last US. National Park trip, before departing for Beijing.

Xin and I were wondering where to visit in late September. We thought about Yellowstone, which I had always wanted to visit but never hashed out a real plan. The airfares were way too expensive plus Xin had already seen it, so we gave up… Rocky Mountains in Colorado were also on our list, but I was worried about the crowd…Then Glacier came up.

Glacier National Park is something that seems so remote and isolated. It’s in Montana. I had known Montana only from the movie “Arrival”.

It was chilly in Montana in late September. Most trees there already turned golden, fervent but quiet. We spent four days in Glacier National Park area. The park is divided into the east and west segments with the continental divide running through in the middle. The climate was drastically different between the east and west sides. The west side was generally very mild. It rained a little bit and the temperature was always above freezing point. The east side changed from day to day, and was on someday rattled by snow storms. The east side was eventually closed due to severe weather conditions. It took about 1.5 hours to drive from west side to east side, and we did this very single day in our four day trip there. The drive was very scenic with no traffic. 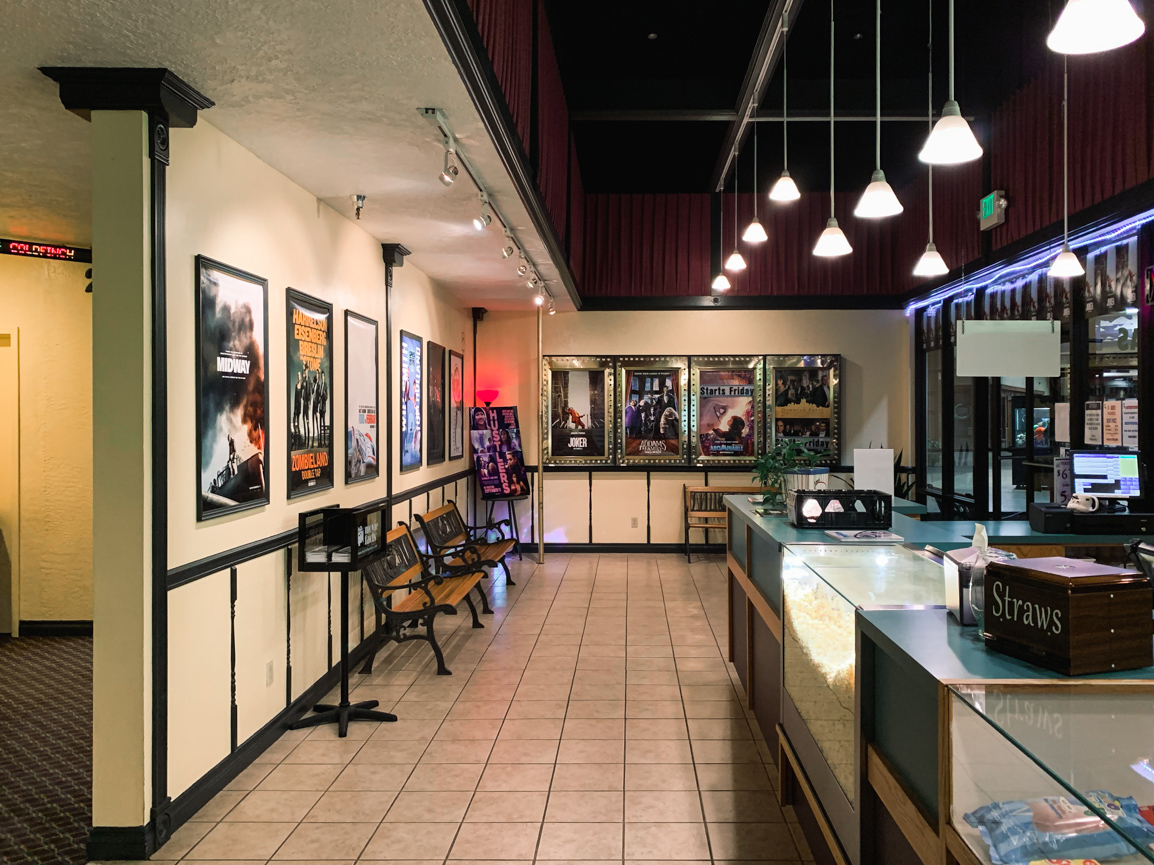 First night. We went to a theater in Whitefish after dinner. The theater is small with two rooms and one staff person. I very much enjoy watching movies in small theaters in remote towns. Feels like in a different world. 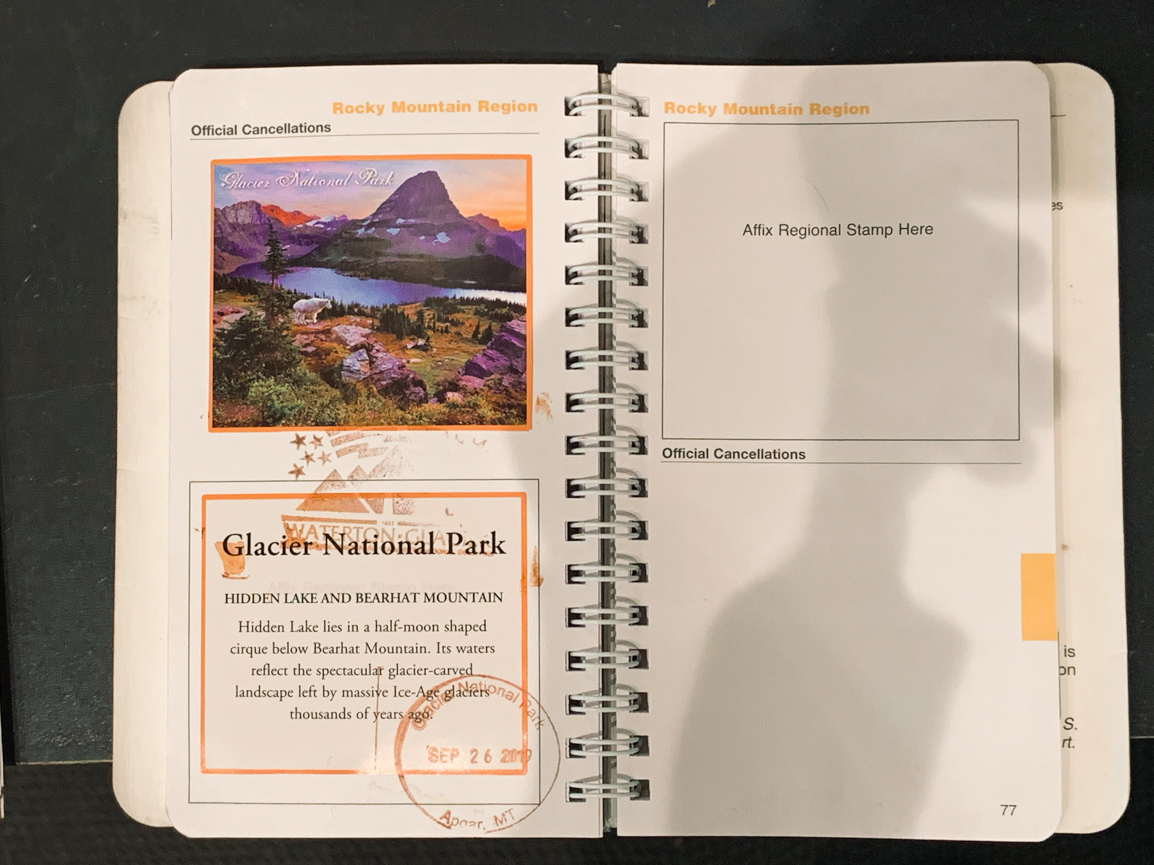 My last NP stamp bought and stuck in Apgar Visitor Center on the west side.

Golden tree leaves captured on our way to the east. 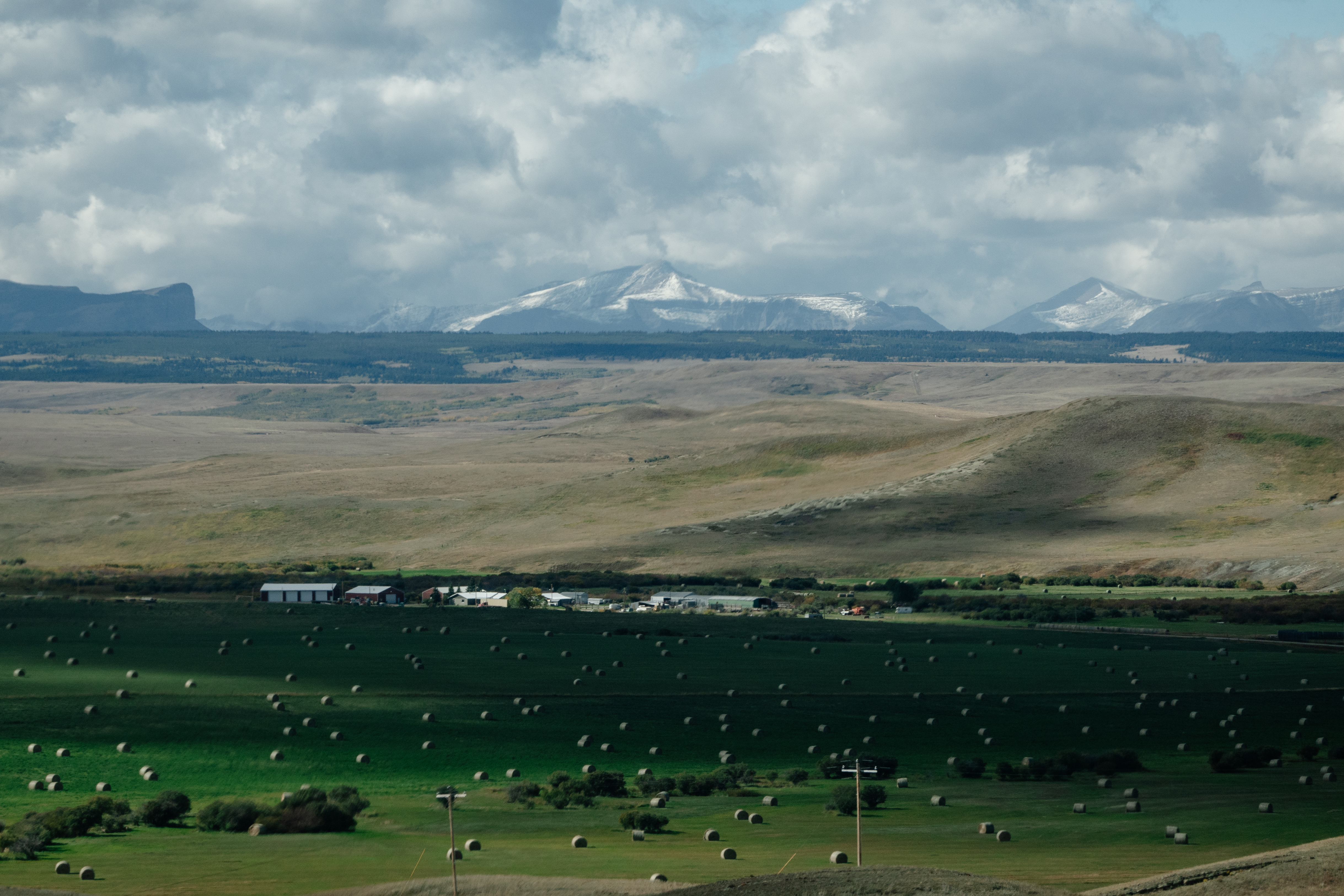 Chief Mountain on the east side. It cleared up for two hours–the only two hours of good weather on the east in our entire trip.

It became gloomy again on our way back to the west. 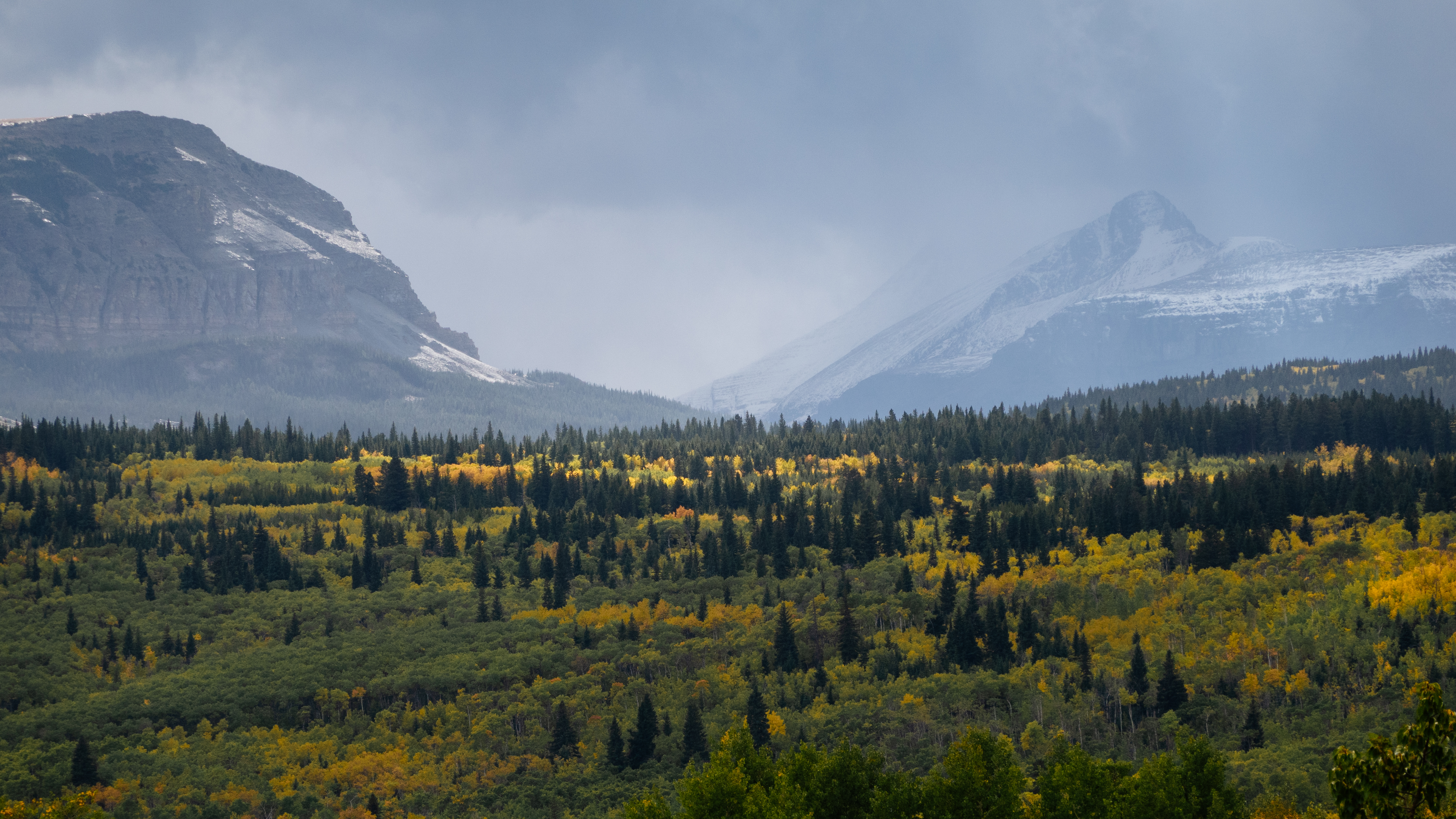 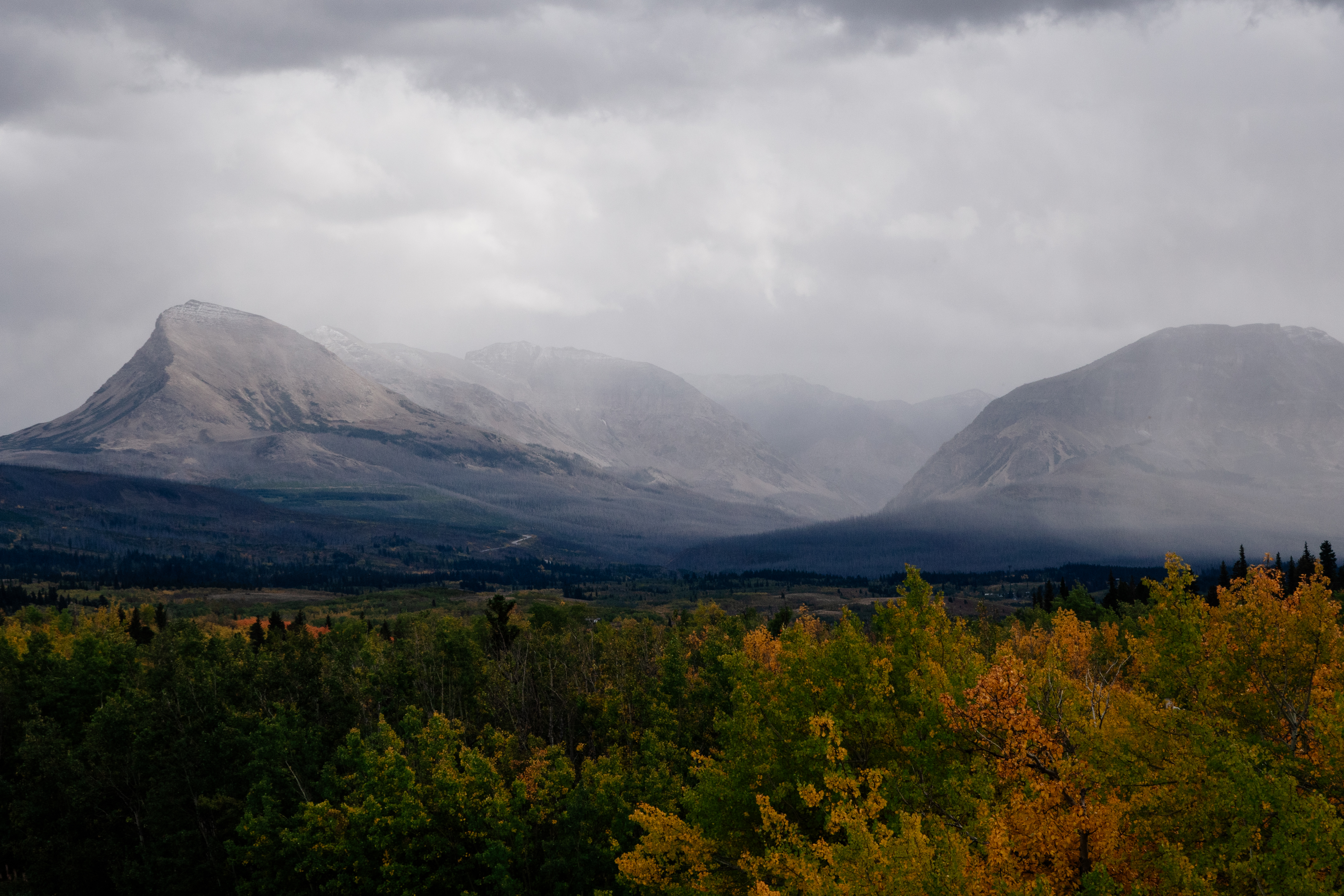 Driving back to the west. 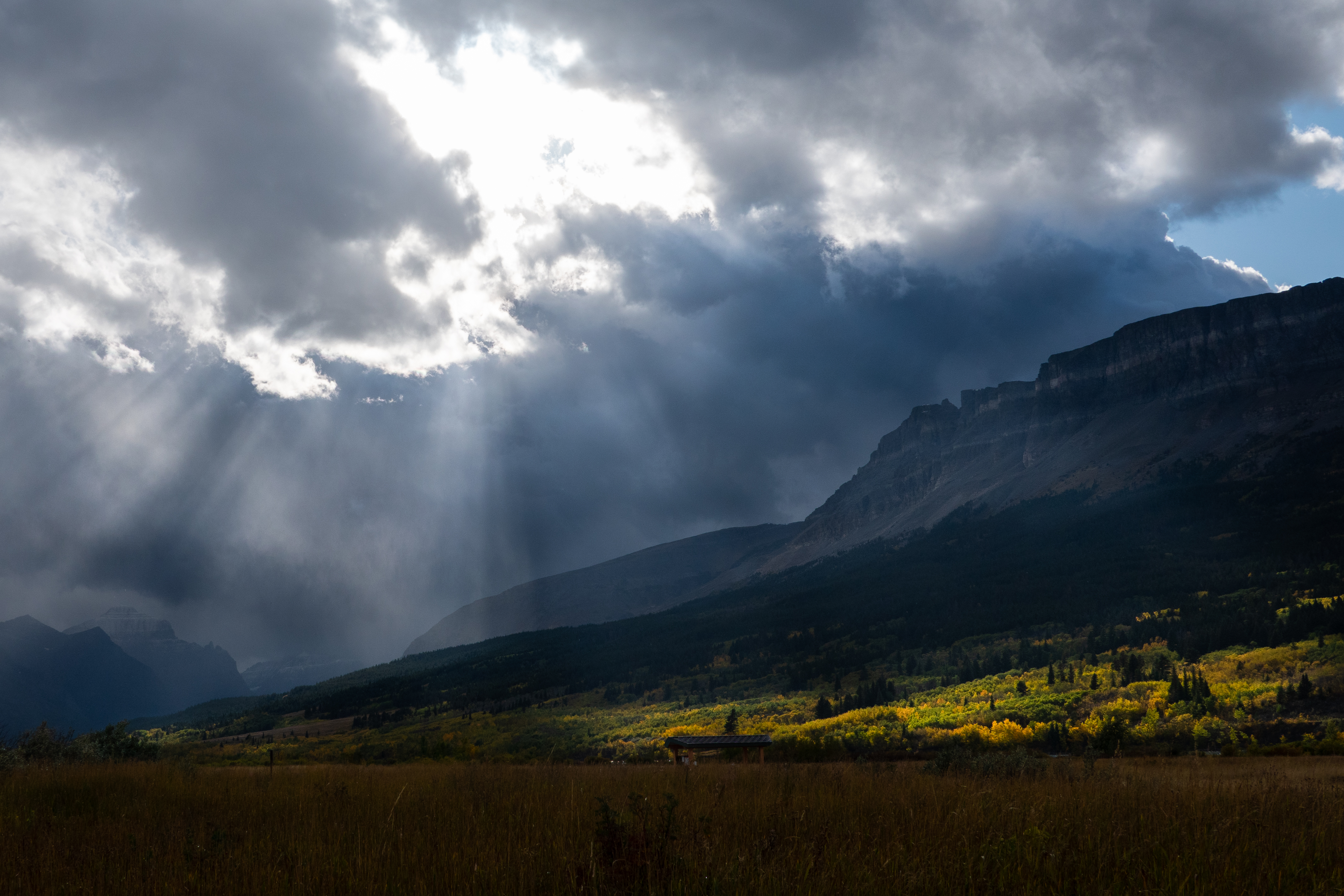 Outside Saint Mary Visitor Center on the east side. Our second trip to the east.

Our thrid trip to the east.

Our fourth trip to the east…Last try. We were so persistent because all the fun trails, including the Grinnell Glacier Trail, is on the east side. We had to head back because of the snow and icy roads…

We stopped by this East Glacier Park Village twice to eat lunch and buy stuff. There was a nice little cafe called Two Medicine Grill. We stopped for hot drinks before turning back. While waiting for our hot chocolates, we found that this cafe had a Instagram. People were taking pictures with this dog right here four years ago…

So, we didn’t see the glaciers in the end because of the weather on the east side…